The MACH-ETH is a flexible automotive network interface that features one Ethernet port, two CAN FD channels, a LIN channel, a USB and RS-232 port, and multiple I/Os.

The interface offers a wide range of use-cases. Its CAN(/FD) and LIN channels are accessible over Ethernet or USB, which allows to use the device as an Ethernet or USB interface. Furthermore, the user-programming possibility enables the user to customize the device’s firmware, which is mainly useful for HiL and remaining bus simulations.

The device can act as an Ethernet-CAN(/FD) or Ethernet-LIN interface as well as CAN(/FD)-LIN gateway. With the help of an open communication protocol, the user can easily access CAN FD and LIN channels over Ethernet TCP/IP or USB virtual COM port respectively.

A user-scripting feature allows to run user applications directly on the device. The device comes with a free-of-charge C language SDK which enables the user to customize the device’s firmware, and realize any kind of function directly in the device, such as rest-bus simulations.

The MACH-ETH features one analogue input and one digital output. Both are accessible over TCP/IP and virtual COM port, as well as in  the programming SDK. 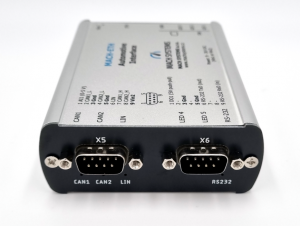