We have introduced a bi-directional 100BASE-T1 (BroadR-Reach) to 100BASE-TX (Fast Ethernet) Media Converter. This interface enables the user to easily connect an automotive device with an OABR port, such as a camera or an ECU, to a standard computer/PC network.

In nowadays, camera systems are widely used in vehicles. They inform the driver about the vehicle perimeter and they are also used in ADAS systems for lane departure warning, obstacle and pedestrian detection and autonomous systems in general.

ADAS systems increase security but they also demand a higher computing power and a higher communication bandwidth of electronic systems. Camera’s video stream that is transferred towards the ADAS ECU needs to be of a very good quality so that the computer vision algoritms can work efficiently – the less compression, the better. This demands high throughput of vehicle’s bus used in the automotive industry.

As a substitution of in-vehicle high speed networks such as MOST or FlexRay, the Broadcom Corporation has developed the BroadR-Reach technology, lately known as “OPEN Alliance BroadR-Reach” (OABR). This was standardized as IEEE 802.3bw (100BASE-T1) in 2017, being unofficially called the “Automotive Ethernet”. 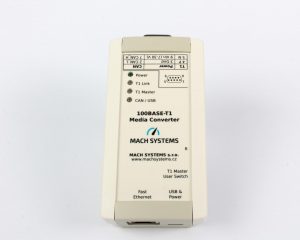 100BASE-T1 / BroadR-Reach is a new Ethernet physical layer that uses an unshielded twister-pair for a full-duplex transmission at 100 Mbit per second. The advantage over the Ethernet is that it uses a lower frequency for coding which allows the usage of an unshielded lower-quality cable. Secondly, the full-duplex transmission needs a single twisted pair, unlike 100BASE-TX which needs two twisted pairs (one of them for each direction). The maximum cable length of a 100BASE-T1 point-to-point link is 15 meters.

We offer a 100BASE-T1 Media Converter, that makes a physical layer conversion between BroadR-Reach and Fast Ethernet networks.

This BroadR-Reach Interface features a single 100BASE-T1 port available on a DSUB9 connector and a single Fast Ethernet port available on a standard RJ-R45 connector. The user can configure the device as a OABR Master or Slave by an on-board switch. The converter can automatically detect wire polarity of the T1 port.

Media Converter can be powered via both DSUB (9-30 V DC) and Micro-USB connectors. As an advanced feature, the user can access SMI registers of both 100BASE-T1 and 100BASE-TX transreceivers (PHYs) over a simple binary protocol over CAN bus or virtual COM port (USB). The user can:

100BASE-T1 Media Converter is a handy interface for those, who need to easily connect a BroadR-Reach network to a standard computer network.